Integration of Software Heritage in FOSSology

Google Summer of Code 2019 Final Report. The process of integration of Software heritage.

FOSSology is an open-source license compliance software system and toolkit. As a toolkit, a user can run license, copyright and export control scans from the command line. Users files can be imported, stored and tracked in FOSSology for compliance workflow experience. License, Copyright, and export scanners are tools available in FOSSology to help with the user's compliance.

The FOSSology system is a combination of agent runs in series to perform a specific task. Fossology has several agents like unpacking, license analysis, Copyright, etc. Agents are used to performing analysis or management tasks related to anything in the database. Each agent in FOSSology performs one task.

In this project, I was working on an agent to integrate the FOSSology in software Heritage. There were several steps to implement the feature. The total work is divided into four stages. The stages are dependent on each other and the total flow can be understood by the diagram as described below. 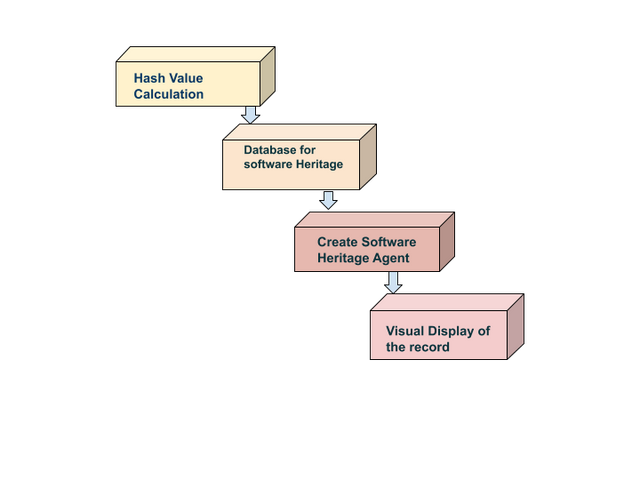 I was working on this section during my first evaluation. This section deals with the sha256 calculation of a file. Previously when a package is being uploaded in FOSSology the md5 and sha1 values are being calculated for the files of the package and is being inserted into the pfile table by the ununpack agent(which will run while uploading a package). My job was to alter the table pfile to add a pfile_sha256 column in it and to calculate the sha256 for each file and stored it in a new column in the same column. The development phases contain several lines of code changes and database schema alteration along with migration commands to run on the existing data in databases. In pfile table of the database, I have added one column named pfile_sha256. The structure of the column is:-

The code for calculating hash values can be found at utils.c file of unpack agent and the process it does is similar to the code what is being shown bellow

The SHA256 is required to get the value from software heritage.

As you can see here the primary key is software_heritage_pk, pfile_fk is the foreign key and other two columns license and origin holds the records from the software heritage.

This one is the most exciting and the heart of my project. I was working on this section during my second evaluation of GSoC. This feature includes calling the API all the features that the agent is going to perform and various sections like

Apart from the main deliverables above, I also contributed a few other patches.

What did I learn from Google Summer of Code

During my whole time period in Google Summer of Code, I have learned so many things such as:

Currently working as a intern in Google Summer of Code for Free and Open Source Silicon Foundation. Algorithm enthusiastic, With two years of experience in web development, real Time application development and javascript lover and rest you will know on our meeting.

get update from anywhere

Ping me your query I will reach you soon.